As most of you have figured out by now life is not boring at Jumping H Farm. I feel like sometimes I am on an episode of "Punked" or at the very least there is a film crew in the bushes throwing weird stuff my way to see how I will react. So with that being said on with my story.

Our trail ride started out like most others. It was a beautiful day in March and two college girls were in town on spring break and wanted to go on a 1hour trail ride. Seems simple enough this happens all the time. We saddle up, and off we went. We joked with the girls about how we didn't charge extra for any entertainment that happened on the trail. Maybe that was my first mistake, putting it out in the atmosphere that something could potentially happen.... Who am I kidding we NEVER have boring trail rides. Something out of the ordinary always seems to come our way. Traveling a normal trail we hear a large piece of equipment in the woods, but didn't think much of it. When you live in the foothills sounds travel and you never quite know where it is. In this case however, a man operating a large backhoe was doing work on the property where we were riding. Throwing up our hands and waving we continued on our journey, I was proud of all the horses they passed him without spooking once. Continuing on our selected path we made the first loop and now suddenly the man on the backhoe was behind us. He was lumbering forward on his huge orange Kubota backhoe motioning for me to come and talk to him, however he had not stopped his backhoe or shut it off. There was not a snowballs chance in Hades of my horse Murder walking up to that huge Gozilla looking machine.

Didn't that man know all large orange tractors, or any tractor for that matter eats horses? Especially large black off the racetrack horses named Murder. "Good lord MAN don't you have enough sense to turn that thing off."  I was thinking that in my head, actually there were a few choice 4-letter words in that thought but I will keep this PG. 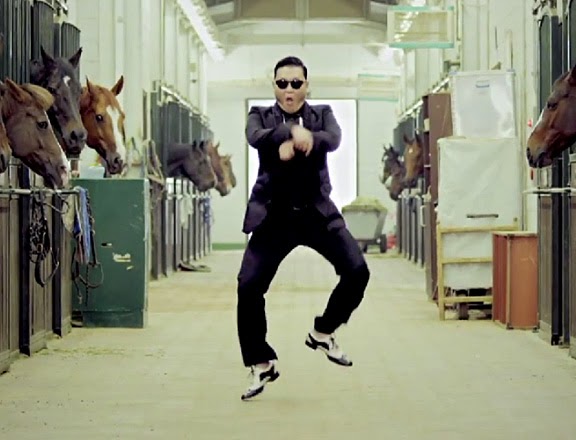 Murder started doing a version of Gangum Style that would have riveled PSY. I put my hand up to signal for him to stop his attack before Murder died of heart failure, and gave him my most serious, ARE YOU FREAKIN KIDDDING ME FACE, and he finally turned Godzilla off.


He asked if we were missing a horse? "Nope all mine are at home accounted for," I said thinking to myself well duhhhhhhh if I were I would be out scouring the county for it. However all my neighbors know my horses get out in teams. It is usually the one escape artist that breaks out and leads his merry band of followers to the choice orchard grass field or the neighbors garden depending on the season. We chatted for a moment about whose it could be all the while I am thinking this man has lost his mind we are deep in the woods there are no horses in this area that I don't know.  We left him to his equipment with the knowledge of this elusive wild horse in the woods. Genna thought he was off his rocker and at the moment I was inclined to agree. On down the trail we went another fifteen or twenty minutes. Now this is the part of the trail that the horses know we are headed for home and while they are well behaved they do have a little more pep to the step as we go on down the trail. Chatting among our group we come to a clearing with a small crop of pine trees off to one side... here is where it gets REALLY Interesting.

If you are a horse person, and well even if you are not, you have probably heard that horses have a "fight or flight" response when they are scared. I am here to tell you Murder's is ALWAYS FLIGHT! Not sometimes, not occasionally, ALL THE TIME. His motto is I don't have to be the fastest I just have to be faster than the slowest horse.
If something comes at him from behind it is amazing how fast he can tuck his butt and run. If it is in front he figures there are at least two others it will eat first and can sit and spin that would make a reining horse champion proud. Last but not least if it comes at him from the side, you BETTER be holding on with your legs, because Murder will turn into a 1200lbs kangaroo and will jump sideways and cover enough ground in one leap you would swear that Chris Angel was responsible for the optical illusion that just took place. Murder chose option #3.

Out of the trees at a high rate of speed came this FAT fluffy pinto horse that looked like it came straight out of a Thelwell Pony book. For those of you unfamiliar with Thelwell this is what they look like. Imagine a pinto version of this pony coming out of the pine thicket. Complete with snorting. He might has well been breathing fire. If you ask Murder he will swear to it.

This pony had found some friends and would not be deterred from the meeting. Murder was horrified, Rocky was ambivalent, Phoenix was on the fence between fight and flight, and well Tonka drew a line in the sand and said "Buddy bring it on."  I jumped off of Murder and tried to calm the crew down and see what was going to happen with this impromptu meeting. Genna piped up and said, "Mom why don't you grab Rocky's halter and catch him."  Good thought, except pinto pony was not having any of it. He led me on a merry chase around all 4 horses for a good 15 minutes. All the while my trail riders were amazed that something like this could ever happen. "Damned spotted pony," I muttered to myself, and well it stuck. Damned Spot it is. After the merry chase I told Genna to head down the trail. If he followed fine if not well even better. Now you know he did. Murder however was not having it.
Damned Spot was dead on his heels, Murder decided that not only was he not going to stand still for me to mount him but that at any moment DS was going to eat him and I was going to be the sacrificial meal if that happened.

He continued to follow us all the way home and into the pasture. DS is no dummy though. He is well aware of what a barn is, but even more important he knows what a paddock gate is. He know just how far he can come to you before you can get a rope around his neck or before you can shut the gate behind him. He was very careful not to let any of those things happen the first afternoon on the Jumping H.  DS stood back from the herd and observed what was to become his new domain.

After several phone calls I located DS's current owner.... His exact words, "Well he was missing but I haven't been missing him. Let me tell you the story of how I came to own that horse." I promise you that no good can come out of the conversation that followed.  Apparently DS is a pasture hopper. His current owner (we will call Jack)lived next door to DS's previous owner (We will call him Fred). One day DS decided that he didn't want to live at Fred's anymore and went next door and jumped into Jack's pasture. Jack called Fred to let him know DS was in his field. Fred's response, "He's in your pasture you own him now." Apparently that was over 5 years ago. Jack's guess is that since they have moved to this new farm that DS is no longer happy with his living arrangement and has decided to seek a home elsewhere...... Apparently that is with us on the Jumping H Farm.

UPDATE: After many months of work and rehab we have found spot a home with a lovely family in Ohio!!
Posted by Nicole Englebert Huttar -Jumping H Farm Re3 at 10:20 AM